Every spay and neuter makes a difference. These stories from BPF’s Partners are perfect examples!

Hearts for Hope recently received a BISSELL Pet Foundation Partners Grant allowing the organization to spay and neuter 62 dogs to prevent future pet homelessness. During that time, Hearts of Hope was able to save Harmony, a stray who desperately needed help. Harmony was picked up by local animal control and was found to have a severely injured leg from being caught in a coyote trap. Additionally, she was extremely malnourished, heartworm positive and in late stages of pregnancy. Hearts of Hope rescued her and days later she delivered 13 puppies. All of the puppies were spayed/neutered with the BPF grant before being adopted into loving families. Harmony remained at the rescue to complete her heartworm treatment, then was spayed and adopted into her new forever home. Happy tails all around! 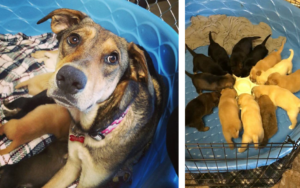 A BPF Partners Grant also supported the Humane Society for Southwest Washington (HSSW) with their Spay and Save program which provides financially distressed pet owners an affordable low-cost option to prevent the birth of unplanned kittens. One of the many cats helped was Sush, who had recently produced an unplanned litter.  She and her five kittens were all spayed/neutered with the BPF grant, something the family could not have done without assistance. Sush has a very important place in her family and HSSW was so happy to be able to help this family in need. At first, Sush’s owner, Linda, was caring for the cat as a stray. Linda’s autistic granddaughter had not spoken a word in 7 years until one day when Sush walked through the door and the granddaughter said, “pretty kitty.” Since then, the cat has lived with them and the young girl named her Sush. She is able to call the cat by name and was able to count the kittens aloud. BPF is grateful for organizations like HSSW who are changing lives of pets and people through their programs!

Both Harmony and Sush had litters before being spayed, but BPF grant funding will make sure that they and their litters don’t add to the future homeless pet population.  Be sure to spread the word. Every spay and neuter makes a difference!